10 Tourist Places in Jammu and Kashmir

The state of Jammu and Kashmir offers the best holiday destination owing to the geographic beauty and serene landscape of the place. This land is filled with natural treasures that attract tourists to the region over and over again. The lines below cite the 10 best places of this destination.

The land of Jammu and Kashmir has been designated as ‘paradise on earth’ because of the astonishing view of the landscape and the tempting weather that this place offers. The state is also famous for the various important religious shrines it shelters. Here are all the important tourist spots you should include in your itinerary while on a Visit to Jammu and Kashmir.

List of Tourist Places to Visit in Jammu and Kashmir The lake has been named after the trees around it and is deep-blue in colour making reference to a ‘jewel in a ring’. It provides houseboat facility being a part of the famous Dal Lake. The lake offers intoxicating ambiance with snow-covered mountains on one side and beautiful flower-garden on the other. Its pollution rate is also very low, which makes it a popular tourist attraction for visitors. The palace was constructed by the Maharaja of the ‘Dogra Dynasty’. Located centrally in Jammu city, it lies facing the Tawi River. Its architecture is influenced by Gothic, Mughal and Rajasthani styles and is famous for the ‘Sheesha Mahal’ located within its premises. This glass palace is filled with ‘Dogra’ paintings coming from Kangra, Basholi and Jammu ‘school of arts’. 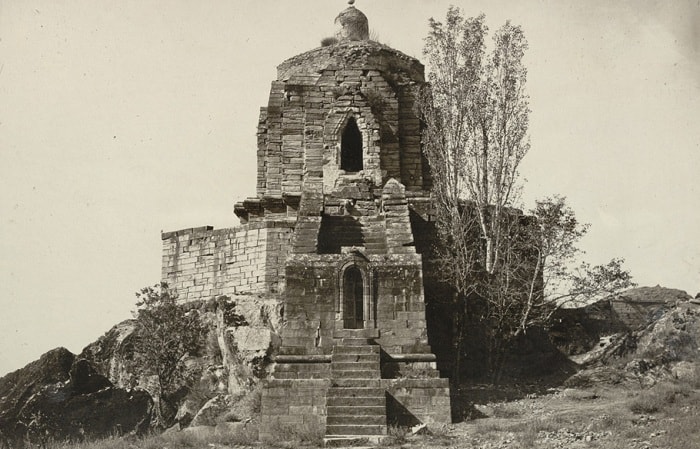 Situated 1100ft above Srinagar on a hill called’ Takht-e-Sulaiman’, the Shankaracharya Temple is a religious shrine with a renovated ceiling that is popular among locals as well as tourists. Apart from spiritual bliss the temple also offers a breathtaking view of the ‘Pir Panjal Ranges’ and the valleys low below.

This is famous ‘Mughal’ garden that is located on the eastern part of Dal Lake. It is pretty close to the state capital, Srinagar and is considered the second largest garden after the popular Shalimar Bagh of Kashmir, also situated in the Dal Lake line. Nishat Bagh means the ‘Garden of Delight’ or the ‘Joy Garden’ and was built by Asif Khan in 1633. Raja Bahulochan built this amazing fort for protecting the city limits. It has a religious approach with Goddess Kali’s temple within the fort’s premises. Located on an elevated plateau this fort is today guarded by a park called ‘Bhave-ki-Bahu’, today which was once a dense forest. The fort has a total of 8 inter-connected towers and its image of Goddess Mahakali’ was brought in from the land of Ayodhya. The Zebanwan mountaintop is crowned with the Pari Mahal. The garden has 7 terraces and the architecture is based on the Islamic style. This garden which lies in Cheshmashahi was constructed by ‘Prince Dara Shikoh’ in the 17th century (middle). Today the garden’s maintenance is a government responsibility. The state capital looks best in summer being located on Jhelum River’s banks. It is crowded with famous tourist attractions like the Nagin Lake, Dal Lake, Shalimar Bagh, Nishat Bagh, Pari Mahal and Cheshmashahi. The place also offers exclusive handicraft items including carpets and wooden artistry. The tulip garden has been recently opened to the public for viewing. The Baramulla district shelters Gulmarg which is famous for the various adventure sports its offers to tourists in summer as well as winter. It lies at 2,690m above the sea level and its ski resort is world famous. You can also opt for cable car rides for scenic view if you are not in flavour of skiing or golfing in this region. This religious shrine is one of the prime Hindu pilgrimage centers in India. It has been dedicated to ‘Mata Rani’ or ‘Vaishno Devi’. More than 8 million pilgrims make a trip to this temple every year despite the fact that its location on the hills of Vaishno Devi makes it difficult to trek to reach the temple. It is the ‘second most visited’ religious sites in India. This popular lake is located in Srinagar and is one of the largest lakes that the world has. It lies 1,775m above the sea level next to ‘Tota Rani’ and offers several recreational activities to the tourists including houseboats and Shikharas. The two famous gardens, Shalimar Bagh and Nish Bagh bordering the lake make it even more popular among tourists visiting this place. The lake freezes completely in winter giving it a completely different look.

Above mentioned are the famous tourist attractions of Jammu and Kashmir that make it popular among visitors both domestic and international.

All about Vaishno Devi Tour Package

Drass Valley – Make Your Tour of the Drass Hassle-Free

Best Season to Travel in Kashmir